Yosemite Park is located in the state of California, USA. Many tourists dream of seeing one of the main attractions of the park — the Horse’s tail. A beautiful waterfall from the streams of fiery lava — will seem at first glance. But in fact, everything is completely different.

The horse’s tail as a natural phenomenon 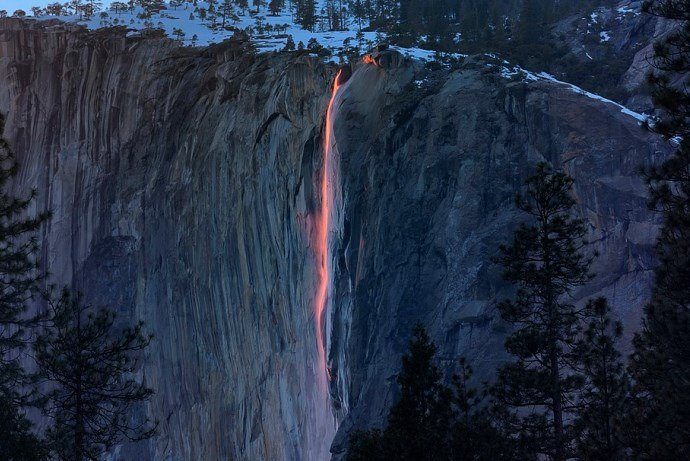 The Yosemite National Park covers an area of 3,081 km². Since 1984 it is listed as a UNESCO World Heritage Site. Every year, the park receives almost 3 million visitors, half of whom settle in the valley of Yosemite. In the granite rocks there is the main miracle waterfall the Horse tail. The total height of Mount El Capitan, from which water is visible — 650 meters, and the height of the waterfall is 480 meters.

You can see the fiery-orange color from the streams of water in certain periods of the year from February 16 to 23. A lot depends on natural conditions — clear and cloudless weather has a favorable effect on the appearance of such an amazing and unusual effect. The unique natural phenomenon of the Horse’s tail lasts only a few minutes — at sunset the rays reflect in the flow of falling water. Tourists for months wait for the opportunity to look at the interesting places of America and get a stunning delight from it.

In other months of the year, the horse’s tail is not particularly noticeable — two small streams of water can not be compared to the majestic and world-famous waterfalls located on the territory of Yosemite Park. 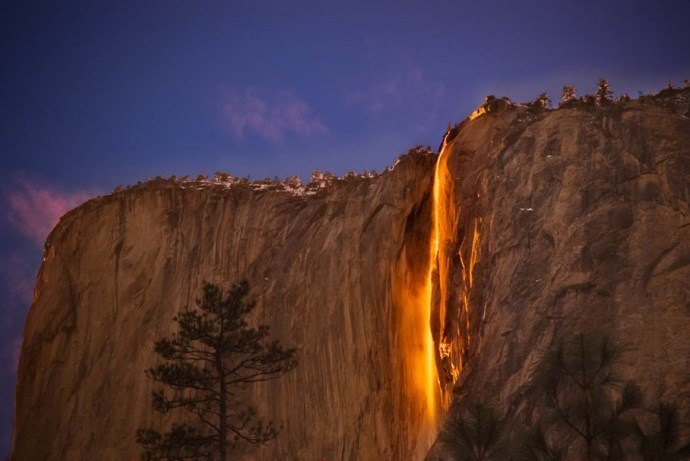 From the depth of centuries to today

The first eyewitness of the waterfall with rare opportunities, is Joseph Reddeford Walker, who in 1833 together with a group of tourists planned to cross the Sierra Nevada mountain range. One can only imagine what astonishment they experienced in the first minutes of what they saw.

In the history of the waterfall there are interesting facts that are not confirmed, and most likely will never be solved. There is a legend and it is impossible to believe in it. On the rocks of the mountain, where there is a waterfall, there used to be a house and a forge of a famous master. The horseshoes that he made for horses were the best in the district. When there was heavy rain, the blacksmith washed off with a stream of water along with his house and smithy. Since that time, in the waterfall, the colors of the red-hot iron are visible, thus recalling the creations of the great master.

Although the horse’s tail and not the most majestic property of the United States, but large crowds of tourists get the greatest pleasure from playing two elements. Water and sun harmoniously complement each other in the warm February days.