Kuril Islands, although located on a different «other edge of the world» from the more familiar to us European part, but because of its unique nature attract many travelers who in particular go there to look at Cape Stolbchaty.

How Cape Stolbchaty was formed

According to many researchers of the Kurile Islands, Stolbchaty Cape has a volcanic origin, which is not particularly surprising for this region, because the Kurils themselves are the peaks of long-extinct volcanoes. So in particular, in prehistoric times, namely millions of years ago, the volcano that formed this rock formation erupted not with a constant lava flow, but with a certain periodicity, which served as a peculiar, columnar structure of this giant. 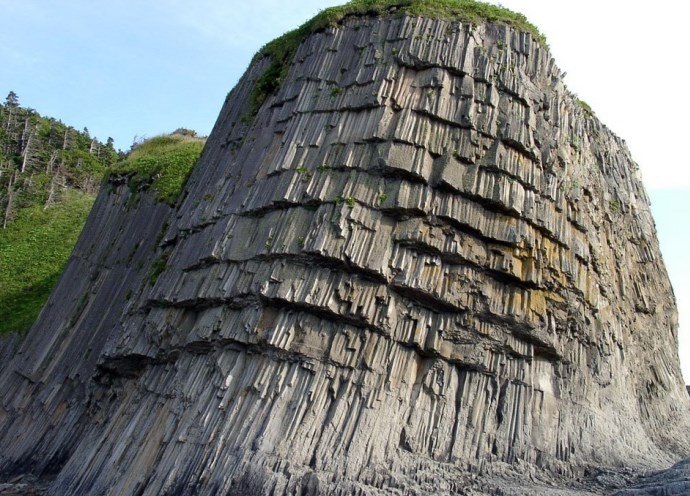 And if to be more specific, then interesting facts about the «parents» of the columnar formations of this cape, it is first of all worth noting the active volcano of the Kurile chain Mendeleyev named after the outstanding Russian chemist Dmitry Ivanovich Mendeleyev, which Soviet scientists opened in 1946. At the same time, they also established that it is a little early to recognize it as an extinct volcano, for the last time Mendeleev showed his severe burrow, in 1880, and after that his activity was manifested three more times, though without an impressive eruption.

The second main «parent» of columnar structures of the cape is water and wind erosion, which destroyed the softer volcanic rocks, exposed the more stable, columnar structures of volcanic basalt, which during the next eruption froze in sea water. So, for today, any trip to Cape Stolbchaty is not only related to a relatively risky journey through the rather unsettled waters of the Sea of Okhotsk. 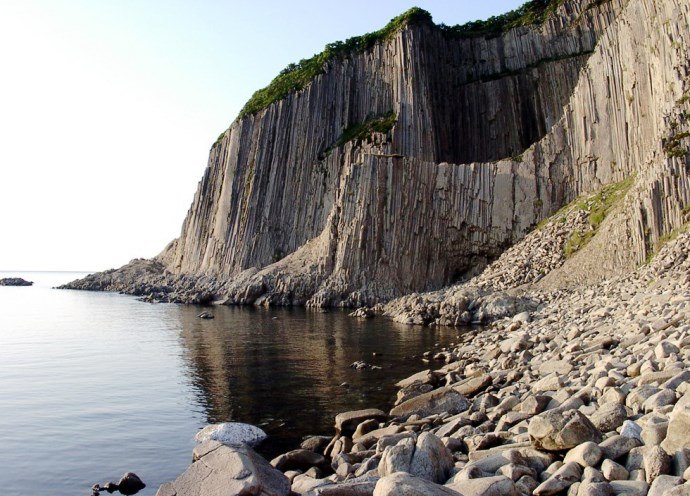 However, such a geographical location of Cape Stolbchaty, and the very island of Kunashir, where the cape and the Mendeleev volcano is located, do not stop the development of this kind of business in the region, such as tourism. And if the travel agencies do not yet offer direct, tourist tours to these islands, but some desperate personalities with cinema and photo equipment themselves make their way to this outskirts of the Earth.

And only thanks to them, we have the opportunity to contemplate all these beauties on the monitors of their computers, viewing travel blogs. Despite all the pessimism, assuming the implementation of this journey is all quite real. And for this, at a minimum, you need to get to Pertopavlovsk-Kamchatsk and then to the shifting ones.