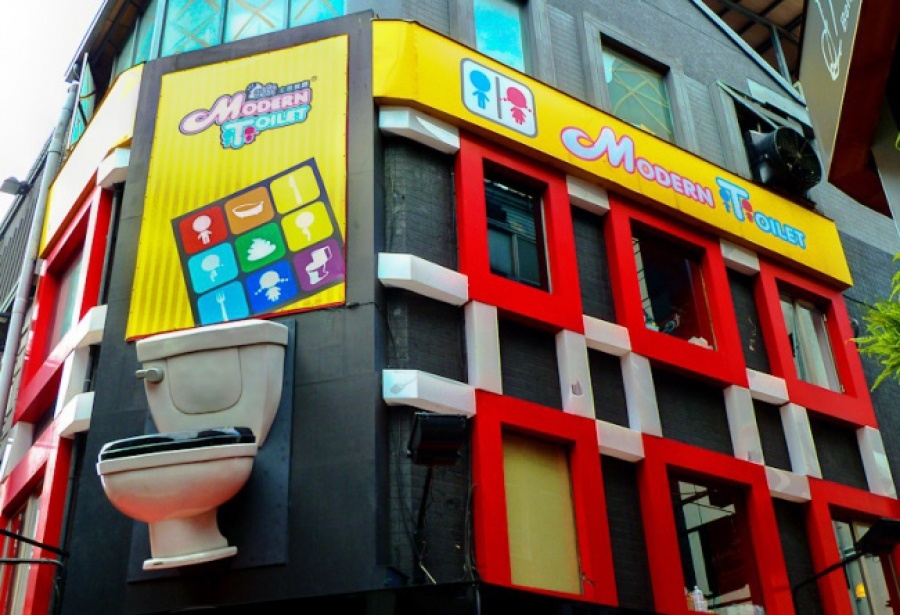 Probably each of us visited at least once a month the restaurant, not to just eat and to relax. Although each country, their own idea of what a pleasure and relaxation. We are talking about China, which built a restaurant with an unusual, for the common man, design. You can take a chance, coming to China, and to the new cafe, where, interior … toilet was chosen for the theme.

What does that mean, you ask, is very simple. Instead of chairs, which are usually in the restaurants, there are very real toilets. In order to try the dish, you may be asked to open the toilet and collect the food yourself. For some, it may seem too ugly and wrong, but this «dressing restaurant» is gradually beginning to gain more and more popularity.

The food here is most common that we eat at home, just a form of submission is not quite normal. In addition, instead of chairs, as we have said, bowls, table instead of as a kind of substitute, but rather a bath. No, of course, no one will offer to sit on the toilet and eat out of the bath, the surface is covered with glass, but it is so unusual that it may seem much too categorically for Russian tourists. After all, ordinary people are not used to this, and for the Chinese, it is quite normal.

And interestingly, that in order to fully support such a subject, instead of the normal tissue, you are given toilet paper. Agree, this is not usual, but mysterious and intriguing. Sooner or later, curiosity takes over and you will be sure to visit an unusual cafe, and believe me, you’ll like …

Forgot to mention about the interior, it is also a logical continuation of a toilet theme. That is, on the walls you can see the brushes, toilet seat, night vases, lamps instead of urinals, and instead of ashtrays, do you think that? Of course, a bidet, even coffee, which has just been brewed, served in a small toilet. For many, this innovation is just shock and not everyone will be able to trust this cafe, but wishing, as it turned out not so little. There even has its fans who do not miss the morning coffee or dinner at this restaurant.