Set Travel > Blog > Strange and funny monuments of the world

Strange and funny monuments of the world

Strange and funny monuments of the world

Traveling to different countries, walking the streets of cities, you can see not only monuments to famous people. Sculptors are trying to perpetuate and objects that mankind can not do without, and food products, the taste of which we remember from childhood, and our smaller brothers, and even try to express in the stone such intangible human feelings. As a result, in every country we can observe quite strange, sometimes ridiculous, sometimes ridiculous sculptures. But it is their unusualness that remains in our memory forever. Let’s get acquainted with at least some of the most unusual monuments.

Let’s start with food. In Moscow, near the plant for the production of processed cheese «Karat» (Rustavelli str.) Is a monument to the cheese «Friendship». However, the idea of sculpture is not only the glorification of the product, loved from childhood by the majority of Russians. This unusual Moscow monument represents a bright eternal friendship and a triumph of reconciliation. In the competition for the best project, 150 works took part. The winner was inspired by Krylov’s fable «The Crow and the Fox. 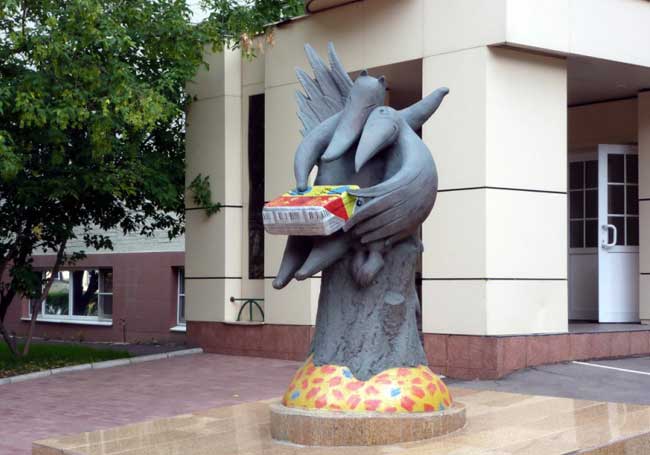 But an unusual monument of Ukraine is a monument of human greed. Rather, it can be called a satire. On one of the streets of Berdyansk you can observe a curious sculptural ensemble. A toad settled on the head of a woman, an old man, a child and a man. To this symbol for completeness of the image the author added a cigar, a gold chain, money and a mobile phone, thus, ridiculing the imaginary happiness from the Ponte.

A little bit about everyday objects. In the USA, in Philadelphia you can see a fifteen-meter … clothespin. Created this sculpture is not a pinch-tycoon. The author is the famous sculptor Klaus Oldenburg, who also owns images of a toothbrush, shovel, scoop and other objects that we use in everyday life, without even thinking about their significance.

Monument in the form of a thumb

About what we do not often think about, it’s about some parts of the body. For example, about the thumb. And the sculptor Cesare Baldachinny created the sculpture in 1965. Truth before the world, she appeared only thirty years later. And there are three such 12-meter fingers in the world. In the photo — a Parisian monument.

And here is an unusual monument of Belgium. Its author is the architect Waterkein. The 165-fold increased iron molecule weighs 2,400 tons. From the top of the sculpture you can admire the views of Brussels. 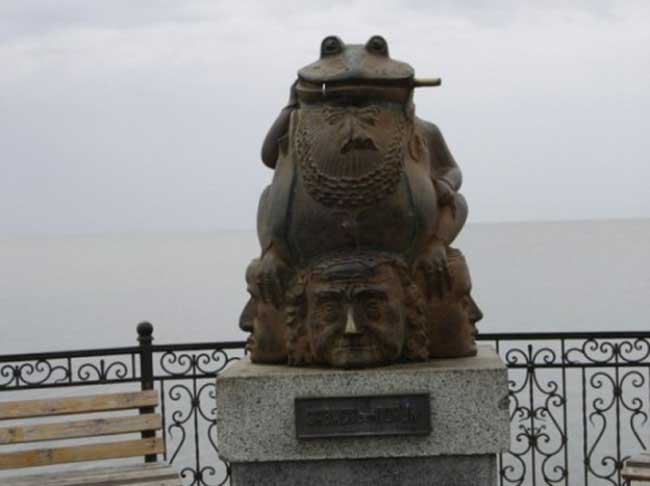 Cow in a spacesuit and a shark’s tail

Do not forget about our younger brothers. Examples of unusual monuments to animals can be seen in Sweden and the UK. In Stockholm, you can see a cow in a spacesuit. And this is by no means a follower of Squirrel and Arrow. Just before the elections of 2004, it was decided to make the townspeople laugh and arrange such sculptures throughout the city. Then they left one. For memory.

A more serious goal pursued by John Barkley, the author of the seven-meter metal shark tail. He dedicated a monument to the anniversary of the bombing of Nagasaki. The idea is that security is not guaranteed for anyone in the world. Here is such a funny, at first glance, composition has a very sad meaning.

And if you want to fully enjoy the unusual monuments, then you definitely should go to the Czech Republic. This is the country where the original sculptures are, almost, not the visiting cards of the country. For example, a monument to Franz Kafka. A writer sitting on the shoulders of an empty suit causes surprise, a smile and admiration.

Of course, this is not all amazing sculptural compositions. Follow the updates of the site set-travel.com and you will learn many more interesting things!