«Extraterrestrial» landscapes of the planet — Part 2

Continue our journey through the amazing places of the Earth with an extraordinary landscape.

On the border of Utah and Arizona (USA) is an amazing place, called «Wave». 200 million years ago there were sand dunes, which over time under the influence of natural forces turned into an amazing wave-like form of hills. To look at this miracle of nature come from all over the world. Not surprisingly, the authorities were forced to restrict access. And they did it in a very original way: by lottery, twenty passes are given — 10 four months before the date of the visit, 10 days before it. However. If all the same has not carried, it is possible to look at similar structures in Utah. They are not so impressive, but they are also very beautiful. 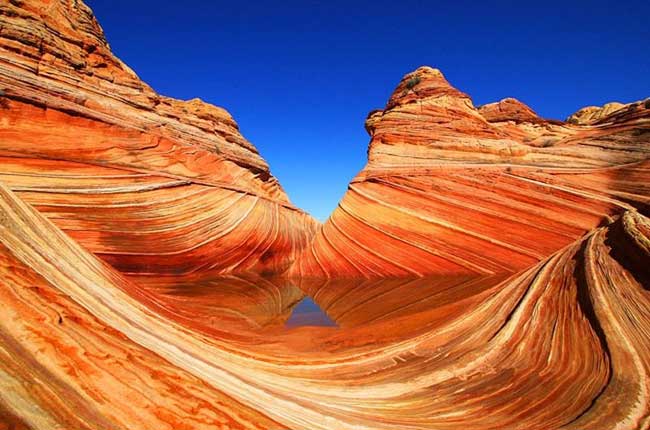 Behind this inscrutable word for the Russian people is the name of the reserve in Madagascar. The name of this place was given from Malagasy «to walk on tiptoe». The mystery of the origin of the name disappears by itself, as soon as you see this unusual landscape of the Earth. There is simply no other way to travel through the Stone Forest.

Under the influence of time there was an erosion of limestone rocks, as a result of which there were formed not usual mountains, but a palisade of stone peaks with sharp peaks. Rare species of trees, animals and birds live in this area. However, the reserve is interesting not only for this work of natural art. A lot of caves, canyons, forests, the Manambolo River — lovers of exoticism just do not get bored.

The status of the reserve Tsinzhi-du-Bemarha received in 1927. Part of the square is completely closed to visitors.

Where is? — Canada. Why spotty? — The special climate and high concentration of salts in hot weather unite their efforts and form an amazing network of small lake lakes. On such a salt film you can walk freely, not being afraid to fail. The unforgettable image of Lake Kliluk in Canada is not comparable to any other geographical object of our planet.

The lake is sacred for local residents. In 1979, the owner of the land wanted to put the clinic on the healing shores of Kliluk, which caused massive protests. The inviolability of the territory was fought for twenty years. Only in 2001 the land was bought out and access for visiting was restricted. Today, only elders can ask permission to admire the unearthly beauty. And it is possible to the chosen. 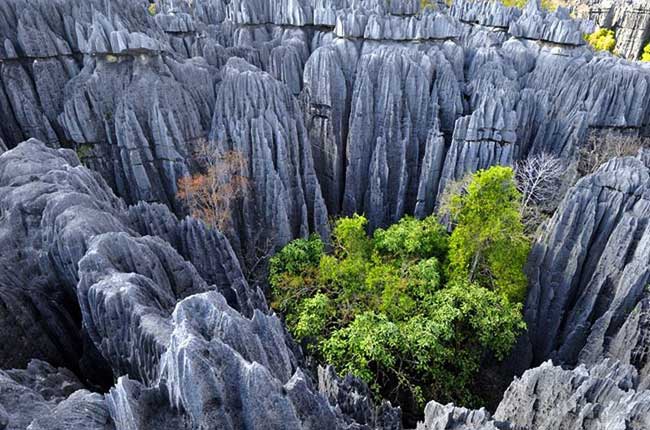 In 1839, the German traveler Robert Schomburgk with his expedition discovered in British Guiana … a stone wall above the clouds. Of course, it was a mountain, but very unusual. The top was cut off like a huge knife. This amazing place at the time inspired Arthur Conan-Doyle to create the famous «Lost World».

But from a scientific point of view, Mount Roraima is one of the South American stem mountains, a plateau that existed at a time when Africa and South America were not separated by the ocean. Indians called such mountains «tepui», i.e. «The house of the gods.» However, this house is unsuitable for life — rains completely wash the soil, leaving no chance for the plants to survive. Although, some representatives of the flora and fauna have managed to adapt to such harsh conditions. Needless to say, these are unique species.

Not only science fiction writers are inspired by the unique shape of the mountain. The creators of the animation film «Up» also sent the cartoon characters to Roraima.

The largest mirror was not made by man. Of course, nature made it. It leaves behind the horizon, and there is a mirror at an altitude of 3500 meters above sea level, behind the clouds. And this is not a fairy tale. This is the Uyuni solonchak in Bolivia.

Uyuni is the largest salt lake on the Earth. In its bowels are stored reserves of minerals and natural substances, which is enough for thousands of years to come. In the area of ten thousand kilometers, the difference in altitude does not exceed one meter. In dry season, the solonchak is a white plain. In the rainy season — lake surface, reflecting the sky. The depth at such a time is not more than a few centimeters. However, if you want to visit this unique place of the Earth, do not forget about the height and give yourself a certain period for acclimatization.