Not far from Petrozavodsk is an amazing complex, an entire architectural ensemble called Kizhi. It is difficult to describe what a storm of feelings and how much delight brings contemplation of this miracle. Of course, stories and photos can not convey the fullness of this amazing picture, it is worthwhile to visit everyone here. 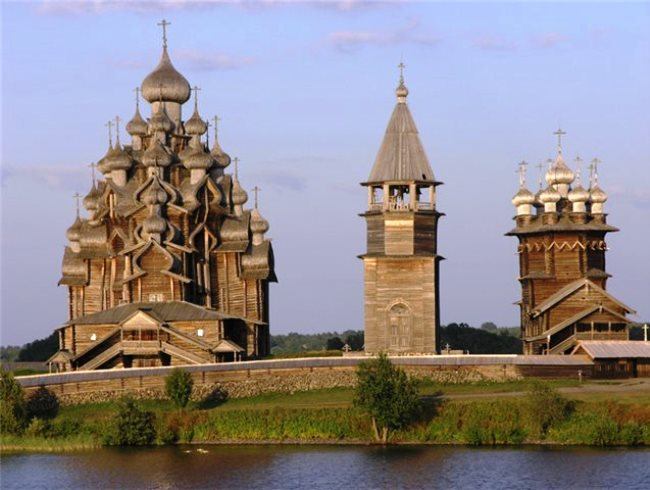 Kizhi is a harmonious complex of constructions, including two churches and a bell tower, which are surrounded by a fence. Elements of the complex were created at different times, different masters made their hand to create them. However, those who do not have a professional view, the differences are not visible, for others, the overall picture does not get any worse. In the center of Kizhi — a real work of art, which, according to legend, created the carpenter Nestor and threw out his ax when the building was completed, since it was already impossible to create anything better. This is the Church of the Transfiguration of the Lord. It can even be said that this structure is the apogee of wooden architecture. Even before the erection of the building, which stands in Kizhi today, there was another church. However, it burnt to the ground after it was struck by lightning. The names of those who built it, did not survive in history as well as the church itself.

The church, towering in Kizhi today, has a height of 37 m. Twenty-two domes crown it. It is widely believed that Kizhi built without a single nail, these domes were created with their help. It is believed that the Church of the Transfiguration in Kizhi is not the only one of its kind. It was built on the model of the Intercession Church, which is located in the Vologda region and was built in 1708. There is a version that this church was built by the same people who later created today’s church — recognized as the pinnacle of carpentry. 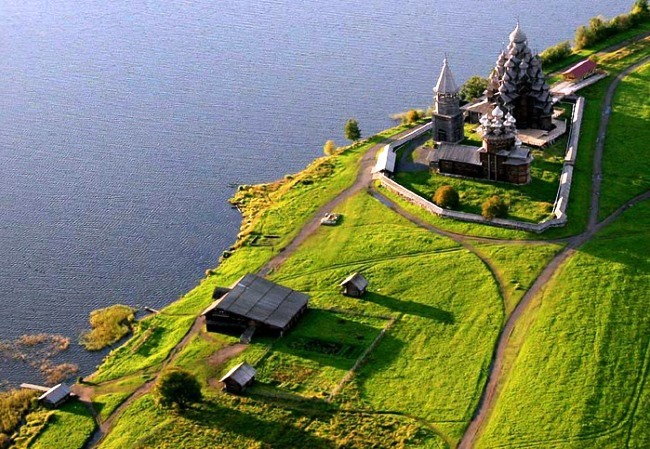 The second building is the Intercession Church on Kizhi. She looks more modest than the Preobrazhenskaya, but makes up a beautiful ensemble with her and is not lost on her background. In addition, in winter, the services are conducted in it, as it is heated. The church has a minimum of decoration, the most notable element of which is a carved ghetto belt. But even this expressive element is called upon, first of all, to protect the church from rain and snow.

The bell tower in Kizhi is the latest building. Its creation was intended to replace the old bell tower, which was in the same place, as it grew old and dilapidated. A new bell tower was created in 1863, just at the time when Russian architecture was not at the height of glory. Therefore, the bell tower has some flaws. And, nevertheless, it organically completes the whole ensemble of Kizhi.

The wall protecting Kizhi was built in 1959. It is like the traditional fences typical of the northern pogosts. In this wall there are corner observation towers and a massive gate. The whole work of architecture, called Kizhi, is only proportionally and harmoniously in itself, but also fits perfectly into the surrounding natural landscape. It is said that one of the Finnish pilots of the Great Patriotic War received an order to destroy Kizhi. But when he approached them, what he saw so struck him, that he did not have the spirit to cause damage to such majestic creations of man. He dropped bombs on Lake Onega. The State Historical and Architectural Museum includes not only Kizhi. Its exhibits are also other buildings of the island. This is the chapel, the windmill, and the houses. The living history of Karelia, represented by the island, is not only under state protection, but also belongs to UNESCO.