The Lena Pillars are the natural park in Russia, as well as the geological formation. It is located only 104 km from Pokrovsk, in Yakutia. Lena Pillars are a huge vertically extended complex of rocks about 100 meters high, along the banks of the Lena River. Most of all these formations are in the Prilenskoe Plateau. 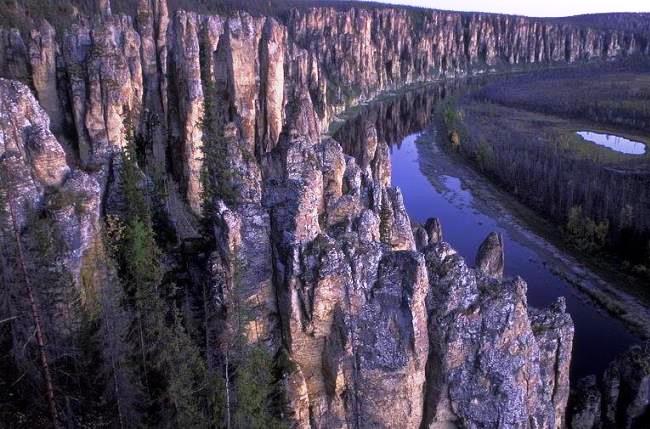 Most of the pillars are between the villages of Tit-Ary and Petrovskoye. The rocks are composed of Cambrian limestones, approximately 100 meters in height. If you look at them in tectonic terms, then they are on the Siberian platform. The founding of these pillars began to form approximately 560-540 million years ago, while the Lena Pillars began to form only about 300-400 thousand years BC.

The natural park «Lena Pillars» was founded by the decree of the President of the Republic of Yakutia. The park consists of 2 parts, Sinsky and Pillars. The total area of the park zone is more than 485 thousand hectares. Ecological tourism is very developed in this park.

In addition to stone pillars, the park has such remarkable things as sands-tukulans, a well-preserved ancient man’s park near the Deering-Yuryakh stream, where ancient stone tools were found. Also on the territory of the park were found permafrost ecosystems, for example mammoths, bison and woolly rhinoceroses. 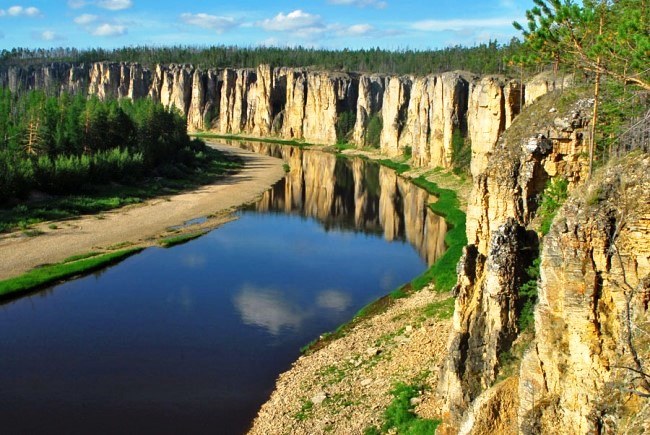 In 2012 the Lena Pillars were officially included in the list of UNESCO protected heritage. Visit the park, go down on the kayaks along the Lena River and look at the amazing Lena Pillars. And after, visit the Museum of Natural History and History and look at the relics of antiquity found in the park. Visiting such places, you do not cease to rejoice and be enriched mentally. Beauty and ideality are fascinating, and the wealth of findings is surprising. After all, Russia is not so developed in terms of tourism country, but miracles and beauty in it no less than in any other place.