There is one amazing island in Chukotka — Ittigran, located in the Senyavin Channel of the Bering Sea. It is there that the main architectural relic of the ancient Eskimo culture is located — the Whale Alley, still concealing many secrets and mysteries. In the mid-1970s, one of the expeditions sent there by the Institute of Ethnography of the USSR Academy of Sciences found this unique cultural monument. 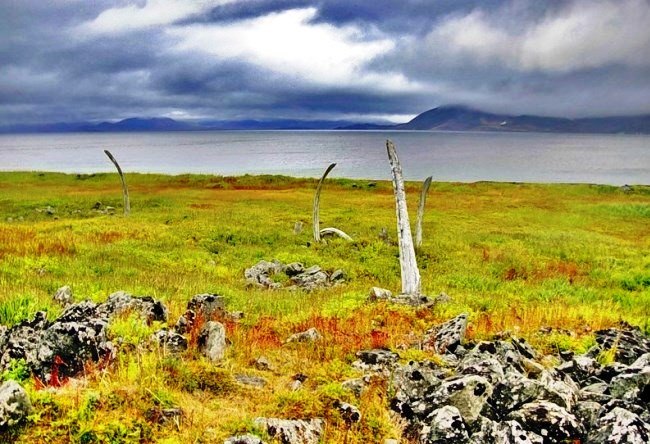 It was a successful, but almost accidental discovery, the grandeur of which strikes so far: the northern shore of Ittygrana is studded with huge whale bones dug into the ground in the form of two parallel rows stretching for almost five hundred meters. That part of the alley, which is located closer to the water, is made up of bones of whale jaws, reaching a height of about five meters. The second, located further to the shore, a series, consists of 15 segments, each of which consists of 2-4 two-meter-long whale skulls. In sum, in order to erect this entire composition, we needed 5-6 dozens of adult Greenland whales, no less. Between the double bone «fence» scientists discovered «meat pits», in the number of one and a half hundred, which retained traces of food. This indicates that at that time large feasts were once held.

In addition to the «meat pits», stone circles were found, in the religion of the indigenous inhabitants of the North, which were directly related to death and burial. Near the pits was laid out a stone road, stretching to a leveled rounded place, which was surrounded by huge boulders. In the middle of the round platform lay an even stone. Not far from the stone, found a hearth built of stones, preserved grains of ash. The scientists concluded that this place was once considered a sacred place for the peoples inhabiting the southeastern coast of Chukotka, and it was also their cultural center. They rushed here to participate in religious or secular events. Here the sea spirits received gifts and prayers from people. There were competitions and tournaments for speed and endurance. And, perhaps, even the initiation of young community members was arranged. 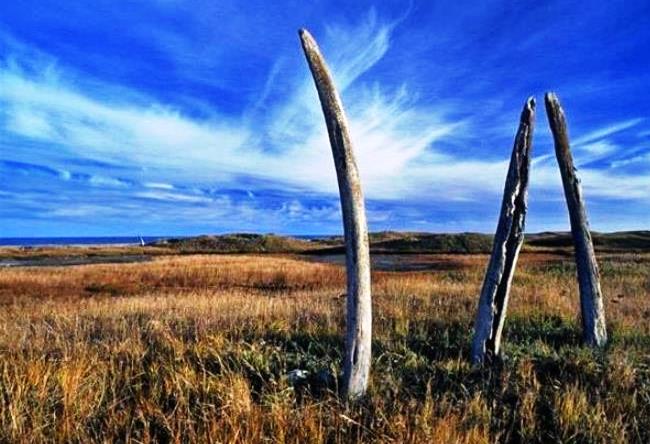 There is an opinion that all those who came to the peninsula could take part in the religious action at once, as the objects of the cult are placed very conveniently for this. However, only the sages and the most successful hunters were invited to the site itself. It is believed that the time of the creation of the Whale Alley falls on the 14th century. For this period, there is a peak in the culture of northern whale hunters. But, perhaps, it was built before. In the 16th century the waters of the Bering Strait underwent a sharp cooling, the whales almost left there, and hunting for them became a rarity. Over time, the true purpose of the bone alley was forgotten. New generations of Eskimos used it as targets for rifle firing.

The sailors calling on the island also did not show respect for this structure. The sea level rose and contributed to its destruction. Previously, the Whale Alley was a much more magnificent object, now some of the bones are fragments buried in the sand. In ancient Eskimo tales it is often said that Ittigran is a mysterious land, but it is not confirmed by anything concrete. Even the oldest residents do not remember anything about it. It is no secret that whalebones, stones and stone slabs were often used in the northern region as a building material. But there is nothing like this alley, neither within Chukotka, nor in the world at all. In this respect, the Whale Alley is a unique cultural monument, of which little is known.