Oasis in the desert

Libya is one of not many countries of the African continent located on the shores of the Mediterranean Sea. And despite the fact that a significant part of Libya is a desert, an oasis in the desert — it’s not so much a rarity.

Ubari: an oasis in the desert and its lakes 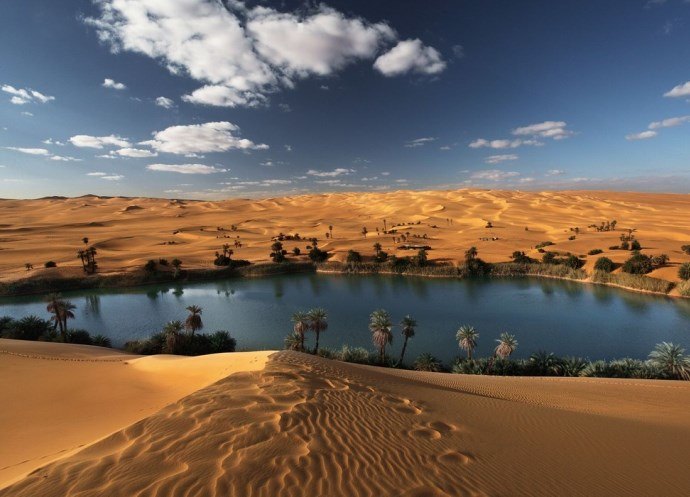 This, quite large oasis in the desert, consisting of eleven salt lakes, is located almost in the middle of the Libyan desert Edeyen Ubari, which is located in the Targa valley and strikes all travelers in Libya, its amazing beauty. Indeed, given the fact that over this year there is cloudless weather throughout the year, the reflection of the blue sky on the watery surface of lakes framed by the coastal greenery, is simply an amazing sight.

However, not only the beauty of the nature of this region, Ubari oasis makes the fact that many tourist guides are classified as the sights of Africa. Another feature of this oasis is the fact that the water of all the lakes of the oasis is only slightly inferior in its salinity to the water of the Dead Sea, which makes it even more surprising that there are a lot of plants on the shores of the lakes of the oasis. And this is starting with the widespread coastal cane and rare, but tall palm trees that live for several centuries.

But such a feature of the lakes of the oasis, namely their increased salinity, has practical application for its Tuareg tribe. In summer, when some of the lakes dry up, and their banks are covered with a layer of salt, the population of nearby villages collect it and, drying it in the sun, sell salt in markets located not far away, larger towns and cities. So, in this case Africa has one more salt deposit. 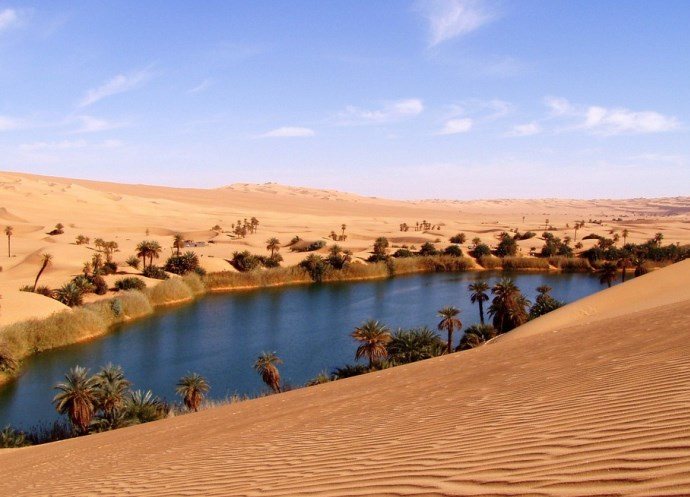 It should be noted that, like many interesting places in Africa, the Ubari Oasis is gradually declining. After all, due to the gradual climate change, over the Libyan deserts, every year less rain falls, which in turn affects the filling of the lakes of this oasis. Proceeding from this, some of its lakes gradually dry up. And one of the largest lakes in the oasis, the lake Umm-al-maa, is filled with moisture, up to its usual limits, only in the winter season. And this, as noted by local residents, does not happen every year.

How to get to the Oasis

To date, many travel agencies include in their tours of Libya visit this amazing oasis. So, if you are an «organized» tourist, then on this topic you should not worry much. But even if the Ubari Oasis is not included in the list of attractions, then this is not a problem, because, from the same Tripoli there are appropriate excursions to this natural wonder.