Not many of us have probably paid attention to such a peculiar coincidence that if you type the phrase «Stairway to Heaven» or «Stairway to Heaven» in one or another search engine, then in addition to the famous hit of the British team Led Zeppelin, the same Google will give out To us information, about the «earth analogue» of this unsurpassed rock ballad.

«Stairway to Heaven», as a means of protection against the Japanese Unlike the musical and poetic image created by the outstanding guitarist Jimmy Page and the vocalist Robert Plant, «The Stairway to Heaven» created by American military experts in the Haiku Valley has quite real dimensions, and no less, a pragmatic purpose. Namely, this is only 3,922 steps laid by the US military in order to connect the Haiku Valley with the Vahiava Valley with a multi-kilometer cable to promptly warn about the possible appearance of Japanese ships or aircraft near the island of Hawaii.

As it became possible to understand that this kind of epic construction has the most direct relation to the events of the Second World War. By the middle of 1942, when a rather powerful low-frequency radio station, a power cable, was located on one of the highest peaks in the Haiku valley to ensure reliable radio communication, it was just that time that passed along this ladder. So, the military specialists who served this cable in a literal and figurative sense made a trip to the very clouds, because the top of the mountain where the radio station was located was often covered by real clouds. 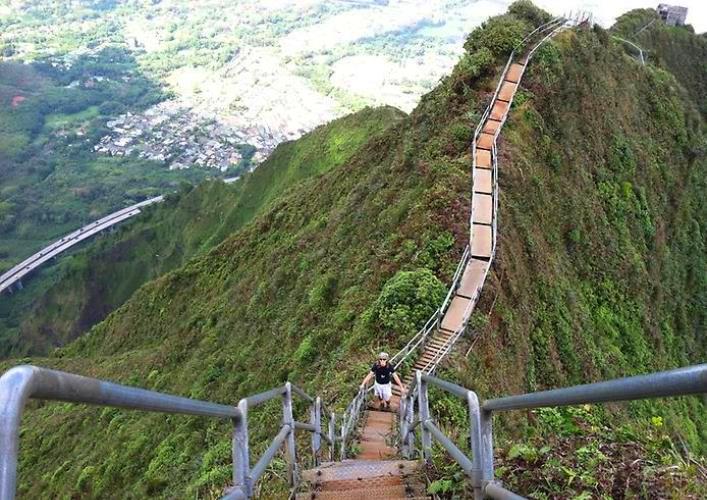 And if in those, such distant years, «Stairway to Heaven» provided peace in the waters of the Pacific and Atlantic Oceans, today «Stairway to Heaven» has a more peaceful, civilian purpose. After all, an out-of-date radio station was replaced by a more powerful and perfect radio station. And by the will of specialists, the former military radio station has turned into a rather powerful radio beacon designed for targeting the numerous ships and aircraft that are in this region. At the same time worn wooden steps of the stairs, replaced with new, metal feet. So, that today the «journey» to heaven has become more secure.

So, as the climb on the «Ladder to the Sky» is strictly forbidden, it will not be superfluous to note that extreme tourism, on this site is fraught with not only a fine, but also perhaps a small «sit-round» in the nearest police station. However, for more curious it is worth saying that this ladder is on the largest island of Hawaii, Oahu, where, among other things, the capital of 52 US states is located in the city of Honolulu. So, to find the valley of Haiku and the staircase mentioned above will not be very difficult.