The Burj Khalifa skyscraper is a grandiose structure in Dubai, the UAE, which became the highest in the world on July 21, 2007 — before its construction was completed! In shape, the skyscraper resembles a huge stalagmite. On January 4, 2010, an official ceremony was held to mark the opening of the building.

The solemn event was attended by the ruler of Dubai Sheikh Mohammed bin Rashed Al Maktoum. And although he announced that the skyscraper will be named in honor of President Khalifa ibn Zayed al-Nahyan — Burj Khalifa, many are used to the project name Burj Dubai or Dubai Tower. The height of this 162-storey building is 828 m. 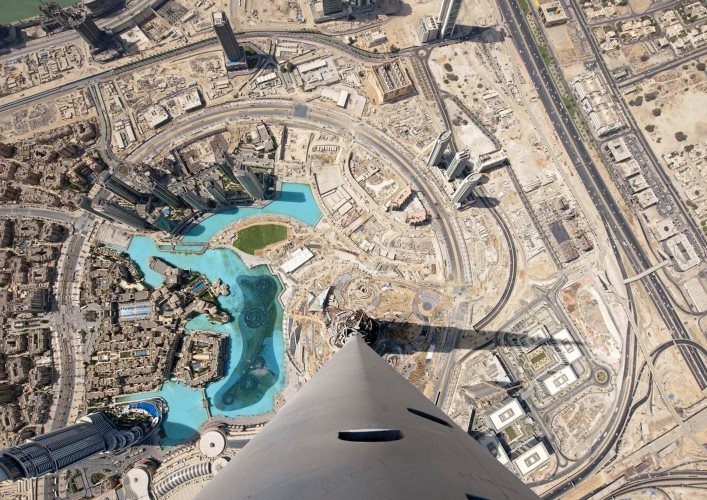 On the 124th floor of the Burj Khalifa skyscraper is an observation deck with a magnificent panorama of the city. Burj Khalifa is created as a completely self-sufficient «city in the city», with shops, hotels, parks, lawns, boulevards and fountains no worse than in Las Vegas. The initial budget allocated for the construction of the skyscraper was $ 1.5 billion. But in the end, the highest tower of the world cost the UAE more than $ 4 billion.

The author of this project was the famous American architect Adrian Smith with the support of the authoritative «Skidmore, Owings and Merrill» bureau, and Samsung became the general contractor. The construction was started in 2004, and the completion was planned by 2009. Although It was going at a fast pace — a couple of floors per week, it was still possible to finish a year later. This was due to some delays in the supply of building materials. 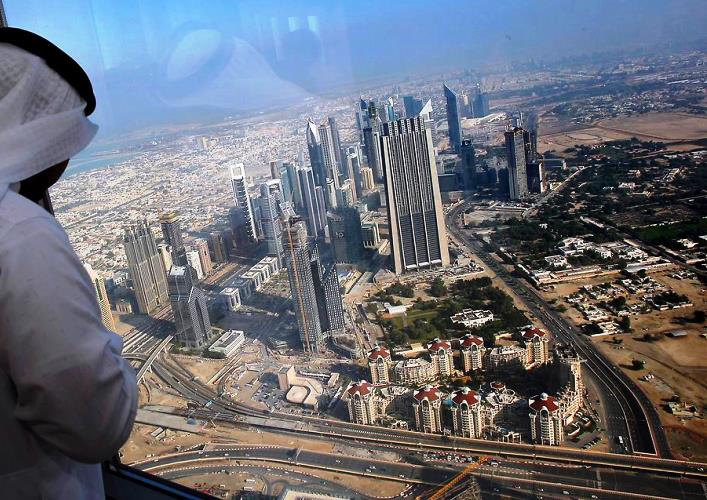 Specially for Burj Khalifa, a unique type of reinforced concrete was created, which was filled only at night, and in the solution it was required to add ice. This technology made concrete capable of resisting significant tensile stresses and withstanding a temperature of +50 ° C.

The Burj Khalifa has its own autonomous power source — solar panels, covering an area of 15,000 m², and a 61-meter wind turbine.

This building also has a unique air-conditioning system. Air, cooled by sea water and underground modules, runs through the entire height of the tower. In front of Burj Dubai is also a beautiful musical fountain, the construction of which cost the city $ 217 million.

Today, Burj Khalifa is one of the city’s most attractive sights. About it, tourists tell a lot of interesting facts. 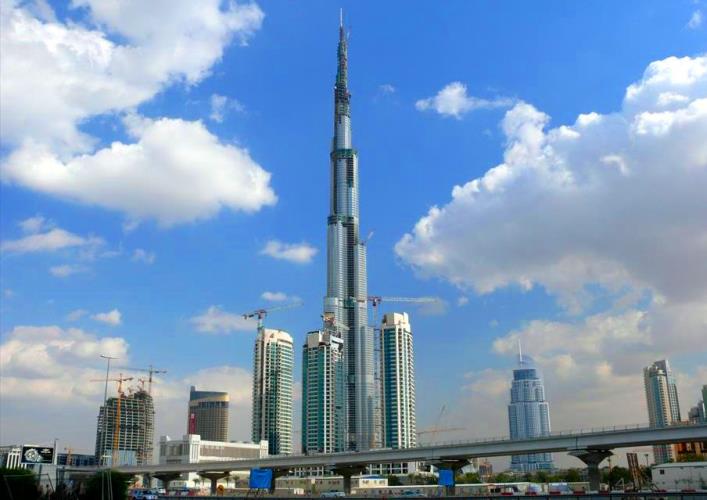 1. To the last floor of the building from its base is a ladder with 3000 steps.
2. At the top of the skyscraper, air is 10 degrees colder than at the base of the building.
3. To complete the facade of Burj Khalifa, 26,000 glass panels were needed.
4. The spire of the skyscraper can be seen within a radius of 100 km from the skyscraper.
5. At the lower levels of the building is a hotel, the development of rooms in which the famous designer Giorgio Armani.
6. Observation platforms are equipped on the 43, 76 and 143 floors of the skyscraper. On the 124th floor is the observatory «At the top».
7. The Burj Khalifa houses the world’s tallest mosque (on the 158th floor), the world’s largest nightclub (on the 143rd floor) and the world’s largest swimming pool (on the 76th floor).
8. There are 65 elevators in the Burj Khalifa, which are the fastest in the world (moving at speeds up to 18 m / s).