Undoubtedly, living with animals is always the most unforgettable experience that remains with you for life. And if you are an admirer of such amazing animals as Rothschild giraffes, then at the Kenya hotel Giraffe Manor you will be guaranteed a breakfast with giraffes.

From the practice of the hotel business, it is known that some hotel owners with the goal of attracting more clients, sometimes go to all sorts of tricks and tricks, both in terms of external registration of their offspring, and in terms of providing some unique services. The breakfast with giraffes at the Giraffe Manor hotel, which is located in the suburbs of the capital of Kenya, Nairobi, somewhat does not fit into this classic marketing scheme for promoting a product on the market. Especially since the hotel is not a separate commercial enterprise, earning a demonstration of such amazing and rare animals as Rothschild giraffes. The hotel is an integral part of the nursery Giraffe Center, which has been breeding for many years these animals, standing on the verge of extinction. 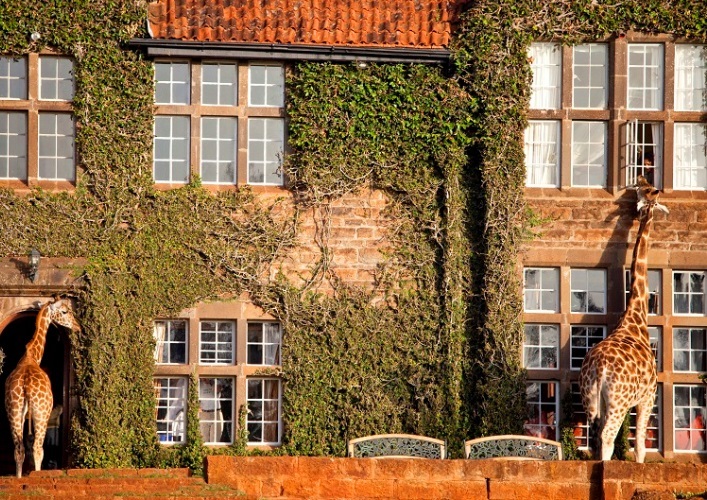 Hotel Giraffe Manor and a bit of its history

After all, the hotel itself is located on the territory of the kennel, the total area of which exceeds 12 hectares of land directly adjacent to the native deciduous forest, where practically in its natural habitat and our giraffes live. And to the hotel itself, they come only to chat with the guests of Giraffe Manor and get them some goodies that the hotel owners propose in advance in the restaurant’s menu. At the same time, if we note that most of his guests come with their children, then this kind of live communication can not be compared to a traditional safari in the reserve or park on the same tourist bus or car.

And the beginning of this amazing story can be considered 1974, when the spouses Jock Leslie and Betty Leslie-Melville purchased this mansion and, being ardent admirers of African nature, engaged in the study of the endangered species of giraffes Rothschild. And almost at the same time they were lucky to save their first three giraffe cubs, who lost their parents. And placing them in comfortable enclosures located next to the manor, Jock Leslie and Betty Leslie-Melville almost started the history of the now famous kennel giraffe Giraffe Manor. 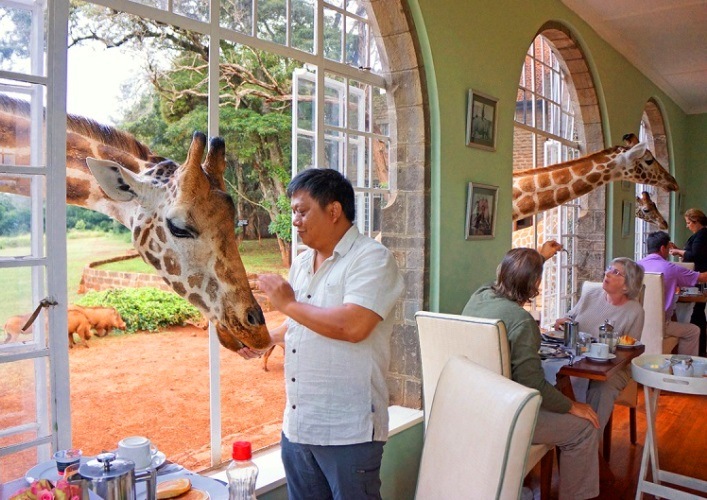 So, that now you can make a journey through the Kenyan savannah and see the animals without unnecessary travel and with the full comfort of a modern hotel. In addition, all funds received from the hotel’s activities and visits to the kennel go to the African Endangered Species Wildlife Fund (AFEW), which in 1972 was organized by Jock Leslie himself.