Among the many monuments dedicated to one or other outstanding figures in Iceland is the thermal spring Snorralaig (Snorralaug), which bears the name of the outstanding Icelandic poet and scholar Snorri Sturluson.

Monument to the poet — the thermal spring Snorraleyg

The very location of this monument is not accidental, because the thermal source Snorralaug (Snorralaug) is located on the territory of the former farm Reykholt, which in his time belonged to Snorri Sturluson and in which he and his family lived until his death. In this case, as noted by the biographers Snorri Sturluson, the very death of the poet is associated with rather tragic events. After all, Snorri Sturluson, besides his literary activities, was also a political figure in the Icelandic state, so he and his two older brothers came from a fairly wealthy and influential Icelandic family of Sturlusongs. And if we return to the causes of the tragic death of Snorri, then as a result of his fundamental disagreements with Gitsurl Thorvaldsson, the then ruler of Iceland, Snorri was brutally murdered in his Rakeholte estate, and the estate itself was burned. 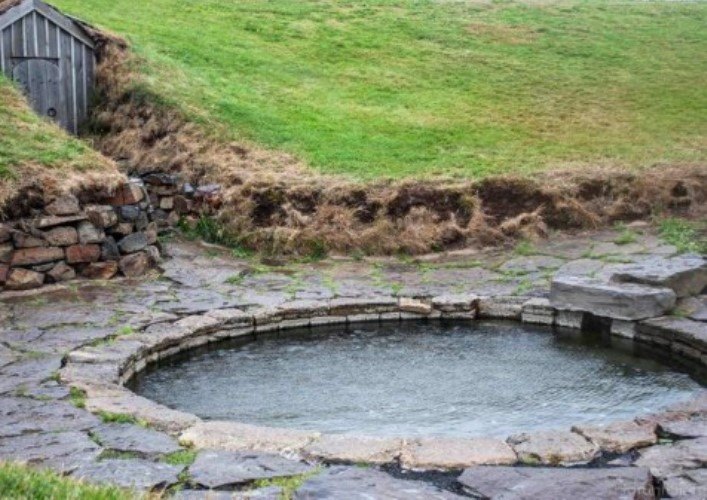 With this in mind, until the thirties of the last century, the name of Snorri Sturluson himself, like his estate, was almost forgotten. However, everything radically changed in 1930, when an American millionaire of Norwegian origin handed over to the Icelandic Academy of Sciences the original works of Snorri Sturluson kept in his family for many years.

The new story of the estate of the Reykholt Snorri Sturluson

From that moment a group of researchers was established at the Academy, which began to explore the legacy of its great compatriot, both in terms of his literary heritage, and in part of his social and political activities. And as a result of this work in the territory of Iceland, there appeared such interesting places in Europe connected with the life and activity of Snorri, as partially restored his estate Reykholt, the old church and the same thermal spring Snorralaig (Snorralaug), which was repeatedly described by the poet in his works.

And now, no trip to Iceland does not bypass both the very estate of Snorri Sturluson Reykholt, and the already famous thermal spring Snorralaig (Snorralaug). And if you for one reason or another will be in the same Reykjavik, then do not regret the time and visit this small memorial museum in the open air.