The Battle of Stalingrad is a significant event in the victory of the Russian troops over the German-fascist army. The German army concentrated more than a million soldiers at Stalingrad to break through to the Volga and capture the strategic and industrial area of the country. For two months fierce battles were fought on the outskirts of the city, and then in the streets … In honor of the soldiers-defenders of Stalingrad (now Volgograd) on Mamayev Hill there is the famous Victory Monument.

Mamayev Kurgan is a 102-ytra point above Stalingrad. For more than four months there were battles for this height .. From September 1942 to January 1943, the Red Army captured the height, but in a few days the forces of the fascist troops again concentrated around the height. Only September 26, 1943, all the surroundings of the Mamayev Kurgan were completely freed from the enemy. But on this earth many soldiers died. For every square meter there are from 500 to 1250 fragments from mines. 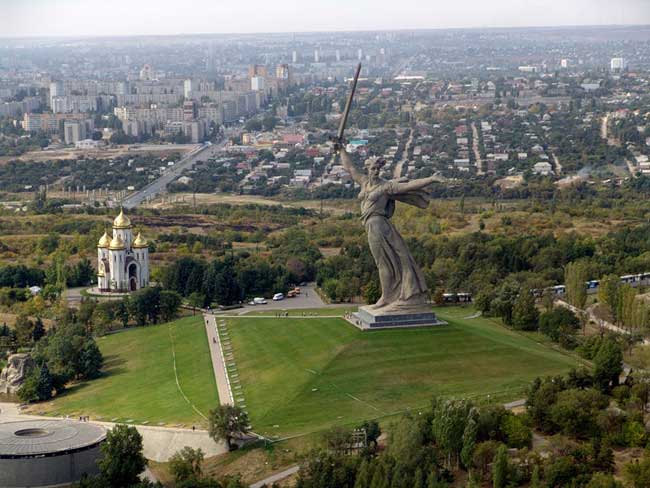 The images of the defenders of Stalingrad resurrected in the monumental Victory Monument.

The sculptural ensemble on Mamayev Kurgan includes a complex of sculptures. As one of the authors of the monument wrote, sculptor Eugene Vootetich: «… All the years, while the artistic image ripened in consciousness, the project was being developed and the ensemble was being built, we all … carried in our hearts the memory of the heroes of the great battle …».

This monument reflects the greatest historical event, therefore the sculptors solved large-scale tasks. It was decided to build not an ordinary type of monument, but a multi-figure composition. In this way, according to sculptors and artists, it was possible to transfer the heroism of the Soviet Army, to reveal the significance of the Battle of Stalingrad.

The steps of the wide staircase go from the high relief «Memory of Generations» at the foot of the mound to the ale of pyramidal poplars, where the main composition of the monument-ensemble is opened before the spectator. According to the plan of the sculptors, so is the preparation for understanding the main theme of the monument.

«Standing To Death» is a composition that reflects the most difficult period of the battle on the Volga. The warrior-hero becomes for the defense of the Motherland. A strong-willed face, a contemptuous smile, determination, hatred of the enemy is a deep, emotional sculpture. 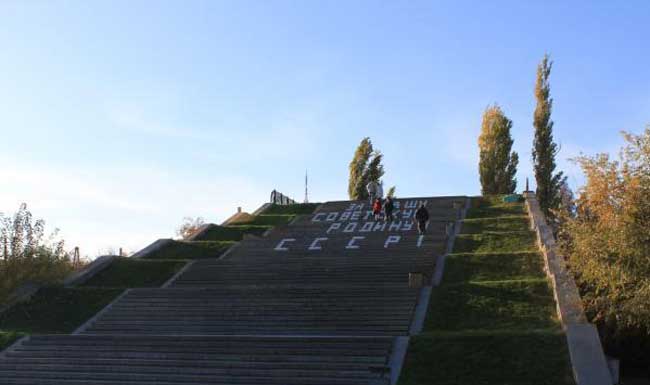 Next we pass to the Heroes’ Square. Here are depicted feats of soldiers: sailors, women fighters, soldiers and commanders. Apotheosis — a symbol of the victory of the Russian people over fascism: breaking the swastika and killing warriors snake.

On the plate, an area of one thousand square meters, we see a relief telling about the onset of our army, the victory over the Nazis and exultation.

The entrance to the hall of military glory is strict and severe and resembles a dugout. But only a few steps — and you are in a sparkling gold cylindrical hall. Red banners, on which are inscribed the names of the heroes, lists of the dead, the Order.

In the square — the figure of the grieving mother about the deceased son. She hugged the soldier before burying him.

Above the area of the Tribulation are the mass graves of the defenders of the city. The burial mound is the shrine of these places.

The ensemble is crowned by the sculpture of Motherland, calling for a fight with a raised sword. This main monument is visible today from all parts of Volgograd, from the windows of passing trains, from the navigable transport on the Volga.

The foreigners who came here after the war said that it is impossible to restore the city. But the efforts of the Soviet people Stalingrad was revived and again acquired the most important significance in the life of the country.