Unique bridges of the world

To the greatest architectural structures can be attributed not only a unique residential building, cathedral, university or some other building. In different points of our planet you can see and … the original bridges are the wonders of engineering thought. Modern technologies make it possible to make the most unthinkable constructions, many of which fall into the Guinness Book of Records, all kinds of world TOPs, and are simply the main sights of the country, which an incredible number of people want to look at. Perhaps, and you will have such a desire after reading this article … 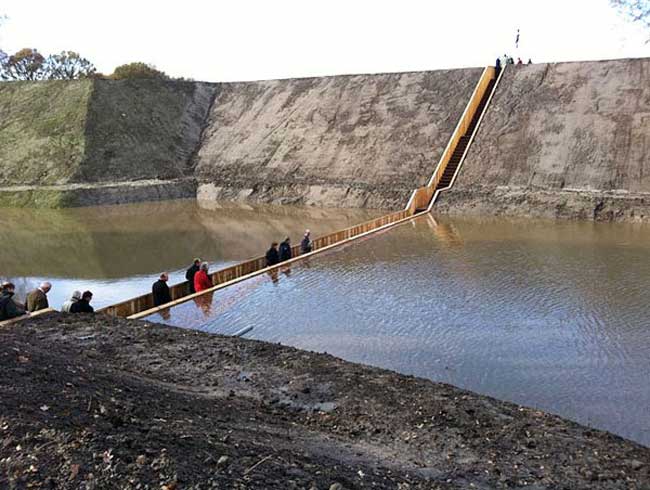 Moses Bridge in the Netherlands

Surely everyone knows a biblical story, which describes the miracle created by Moses. To save the Jewish people who fled from Egypt, the prophet opened the waters of the Red Sea so that the Jews could cross the dry sea. This sacred story inspired the Dutch architects Ada Kila and Rooster to create a bridge that would not pass over the water, but, practically, under it.

The difference from the Bible is only that the waters no longer close back, and everyone can go through a unique bridge at any time. The design restrains water, and the tourist passes along the ordinary road, admiring the surrounding water surface on both sides.

The authors received the award for their great idea in 2011. Then the Moses Bridge was recognized as the best structure of the year.

His name is in honor of the writer. The bridge is painted in the colors of the flag and the emblem of the town of Leeuwarden, where, in fact, it is located. In fact, this site is 15 * 15 meters. Very impressive construction has long been one of the main attractions of the country.

In the town of Magderburg you can observe this unusual structure. Its exoticism lies in the fact that it can not travel by land, but by water transport. The aqueduct connects two canals: Mittelmann and Elba-Havel. On the water bridge over the water can walk and pedestrians on specially designated tracks, watching the shipping traffic. The bridge-aqueduct is also one of the longest in Europe. Its length is 918 meters. 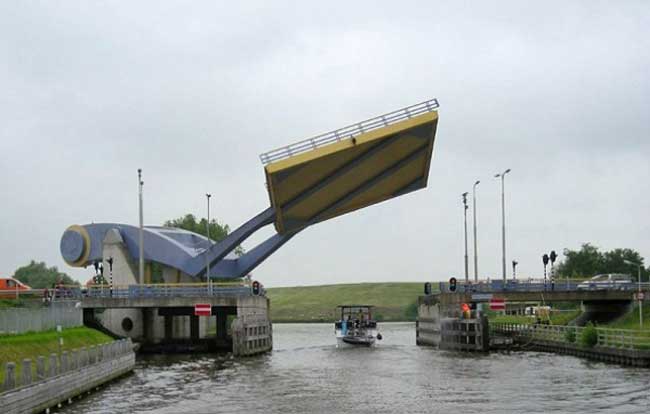 Indeed, a unique object of architecture. Enjoying the multicolored streams of gushing water from under the bridge can endlessly. In parallel, you hear magic music, LED lamps illuminate the bridge-fountain in the rhythm of iridescent sounds. The bridge is listed in the Guinness Book of Records as the longest fountain.

This is the first swinging bridge in the world. It is designed for the movement of cyclists and pedestrians. The location of the bridge above the navigable river Tyne obliged the authors to include the function of expanding arches. When a large vessel passes under Gateshead, the arches rotate 40 degrees. At the completion of the turn, the upper point of the structure is located at a height of 25 meters above the water. The design is unusually interesting and spectacular.

Florence is the most beautiful Italian city. Through the Arno River you can see a bridge of venerable age. The first mention of it dates back to the end of the first century AD. Ponte Vecchio is called «gold» because of the jewelery shops that were located on it in ancient times. The bridge is venerately called «old» because of its age. Today, from this unique bridge you can admire the splendor of the Florentine surroundings.

This original bridge is called a heavenly miracle. The spectacle is fascinating. An incredible feeling of flight is created, because the viaduct is floating in the sky. The highest bridge in the world exceeds the height of the Eiffel Tower itself. The highest support reaches almost 245 meters. Of course, the bridge performs many useful functions, in addition to the aesthetic. First, it solves the problem of traffic congestion, formerly in the area. Also, many high and low voltage cables are laid here, there are numerous devices that ensure the safety of everyone who is at such a crazy height.