Set Travel > Blog > The palace complex of Kashyapa is a legend, «frozen in stone»

The palace complex of Kashyapa is a legend, «frozen in stone»

In Sri Lanka on the rock of Sigiri there are ruins of an ancient palace. This construction can be, with a clear conscience, called a legend, «frozen in the stone,» since the history of this palace is associated with tragic events. Time inexorably destroyed the palace Kasyapa, dried up ponds, but the fossilized legend continues to remain in human memory. 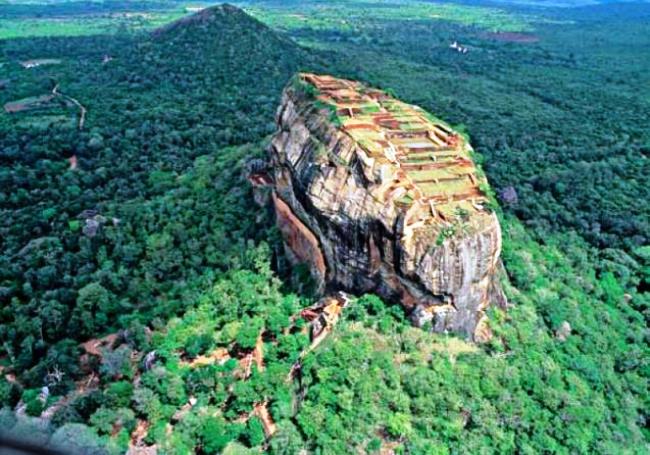 Now this palace complex Kasyapa is trying to restore. It is planned to restore the water supply system, to break a park with an area of 150 hectares and much more. At the top of the rock there is still a foundation of the palace, from the pink granite throne, reservoir, sentry boxes and stone stairs.

In Anuradhapura the king was Dhatusen (459-477 gg.). During his reign, the country flourished, and lived in peace with its neighbors. An irrigation system was built, 18 new reservoirs were built. The king took care of the well-being and well-being of his people. The king had two sons. One was called Moggllian. He was famous for his nobility and intelligence. The other was called Kasyapa — he was a heartless, vain, handsome man, who was eager to quickly take the throne. He captures his own father and exposes him to terrible torture. Kasyapa wants to know where the royal treasures are hidden.

King Dhatusen was a God-fearing man and saw his duty to the people not in the accumulation of jewelry, but in the construction of irrigation systems, thanks to which, the arid island would turn into a prosperous country. The father brings his son to the dam and says to him: Here is my wealth! Razvirepev, Kasyapa orders live to wall Dhatusen in the brick wall of the dam. Brother Moggallian — the legal successor to the throne escaped this execution, hiding in India. This story is recorded in the official chronicle. The Chronicler goes on to say that the parricide declared himself king. But fearing revenge on his brother and close to his father, he found a steep rock (210 m in height) in the middle of a wild plain, and built on the top a palace — an impregnable fortress with bizarre narrow steps, and galleries overhanging the abyss. 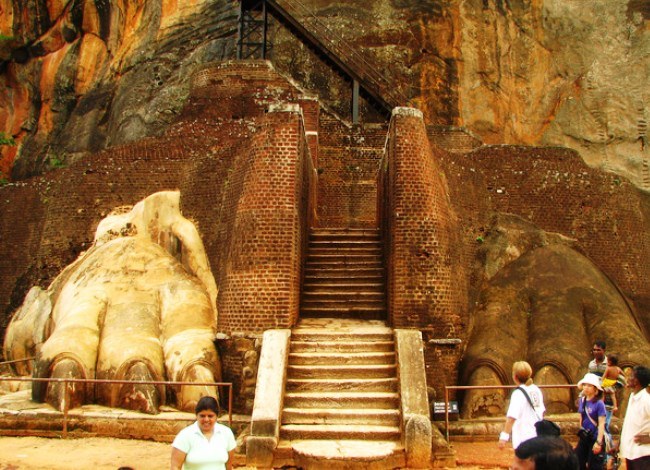 In the north-east, 150 km from the capital of Sri Lanka, Colombo, towers the «Lion’s Rock». This name was given to the palace by chance, because most of the population of Ceylon is Sinhalese, which means «race of lions». A huge (in 3 person’s height) sculpture of a lion, as if sitting on top of a stone block, guarding a seventy meter high — the «Gates of Paradise». In ancient times wooden ladders were made inside the lion, to the top of the rock. Of course, time has done its job, but still the paws of the beast are in good condition. The dimensions of the claws in width are 1.3 meters, and in height — 1.2 meters. One can only imagine how huge the whole idea was.

In the second half of the 5th century Sinhalese king Kasyapa lived in the palace «Lion’s Rock» in luxury, in pleasures, drowning remorse. The foot of the rock was surrounded by the Garden of Pleasures. Many pools and fountains were built. Some fountains are connected underground by terracotta pipes with a reservoir. They still operate and spray water jets in the form of lotus flowers. 18 years after the accession of Kasyap, he was informed that a huge army was coming from India, led by his elder brother, who decided to avenge the murder of his father. In a terrible battle, Kasyapa’s army was defeated, and he himself cut his throat with a saber. His brother entered the city and became king. The Moggallian happily ruled for many years.