The main sail of the Black Sea is the Sail Rock

At a height of 25 meters and a width of almost one meter, this rock of Parus really resembles a sail. However, how he ended up in the sea and today remains a mystery even for specialists. 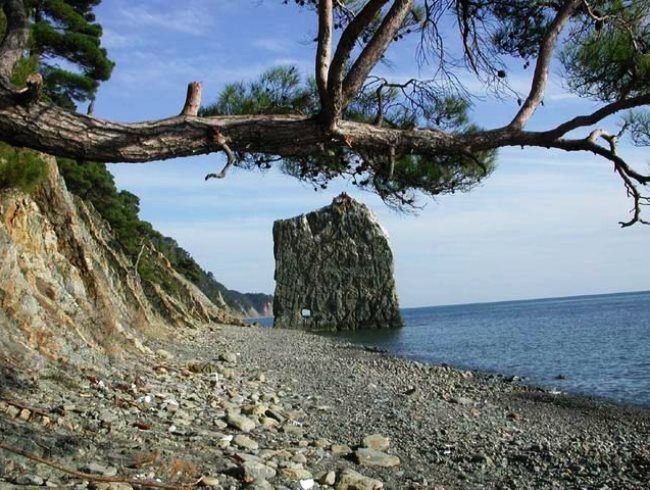 No less curious moment of this story is the circumstance that the shore adjoining to the rock consists almost of similar stone plates rather high and the width is also no more than one meter. However, they all make up a large coastal monolith and have no tendency to move into the sea. At the same time, the top of this coastal massif on the summit is fastened by perennial pine trees.

According to some specialists in geology, this natural phenomenon could be formed for two main reasons. Or this rock in its time broke away from the shore massif and remained standing on a sandy bottom under its own weight or the rock stands in its «place», but over time, the sea washed the softer rocks and a little lowered in level.

No less remarkable moment of this rock is the circumstance that with a fairly high strength of the rock, which consists of the Sail near Gelendzhik, the same remains a small pock hole in the rock of a fairly regular, round shape. According to one version, the hole was formed from hitting an artillery shell during the Caucasian War of 1817. However, this kind of version was disproved when shells hit the rock in later periods. 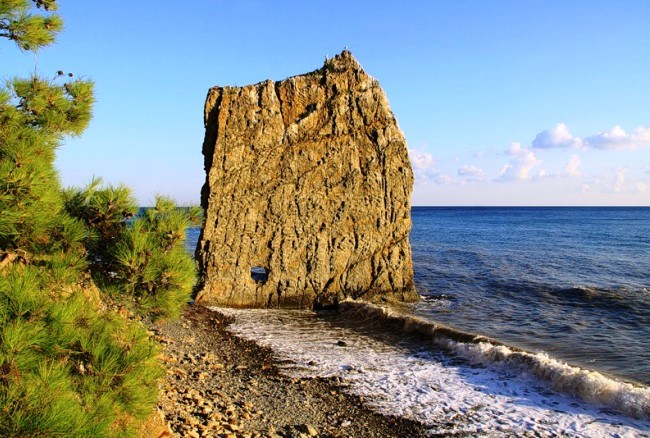 It should be noted that the very rock of Parus is located not far from the village of Praskoveevka, which is seventeen kilometers to the south of the city of Gelendzhik, from which water excursions to this amazing monument of the Black Sea nature are organized for inquisitive tourists. It is also worth noting that Gelendzhik Sail also has a brother, only located on the Crimean coast of the Black Sea.