Set Travel > Blog > The highest waterfall in Ukraine is Wuchang-Su

The highest waterfall in Ukraine is Wuchang-Su

The highest waterfall in Ukraine, Wuchang-Su, is located eight kilometers from Yalta. He is very well known, he is mentioned in songs and stories. The river, which forms a waterfall, starts in the mountains at an altitude of one thousand two hundred and thirty-three meters, and at an altitude of three hundred and ninety meters, it sharply breaks down from the mountain. The waterfall itself is ninety-eight meters high. 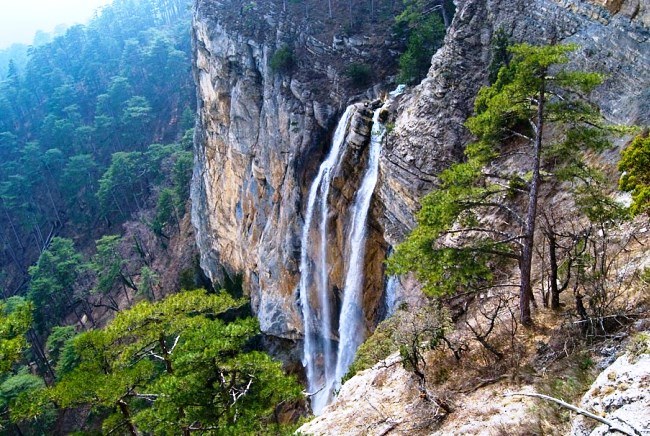 At the largest ledge of the waterfall is a statue of an eagle that flies upwards, towards the water coming down. In fact, this eagle, very successfully crowns the usual and a small water intake structure. From this building water flows directly into the reservoir, located on Mount Mogabi. A little downstream, the river again gives birth to two waterfalls. But they are much smaller than their elder brother. And after that it flows down to Yalta, and already there it flows into the sea.

Above the first waterfall, the river shows the same name with it — Wuchang-Su, but below its name changes, and it becomes Waterfall. But back to the waterfall itself. At different times of the year he changes his appearance. In the spring it appears rattling and stormy, and in the summer it consists of only a few jets.

When the real summer heat comes, it completely withers. But in winter, when the temperature of the ambient air is below zero, it freezes completely. And before the person appears in the form of a solid ice block. It was on this block in the winter of one thousand nine hundred and eighty-six and the climber, climber Lishaev Yuri, climbed up. According to him, the ascent was quite difficult, dangerous and just wonderful. 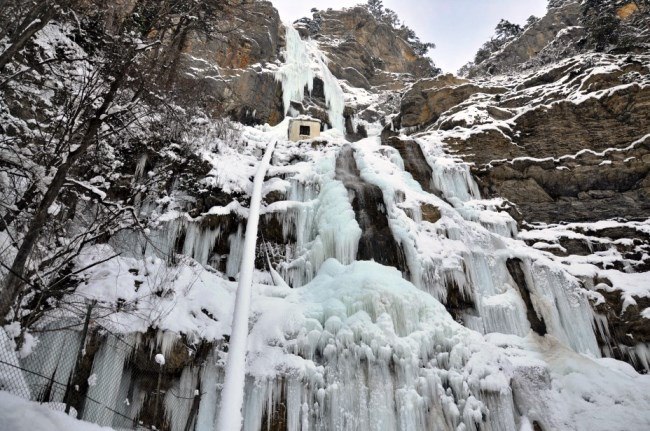 After all, it turned out that the waterfall is not a solid block of ice, individual jets of water freeze. And every icy pipe in the sun shone with all the colors of the rainbow, and if you look closely, it was a feeling that water was flowing inside the tube.