Since ancient times Sofia Novgorod was a symbol of the ancient city of Novgorod. This temple was erected from a natural, sometimes rough stone, which was mined from the Volkhov limestone slab. The quality and texture of this stone have determined the appearance of Sofia Novgorod for many centuries. This unique building is one of the oldest monuments of ancient architecture in the North of Russia. This cathedral is only a few years younger than Sophia of Kiev. 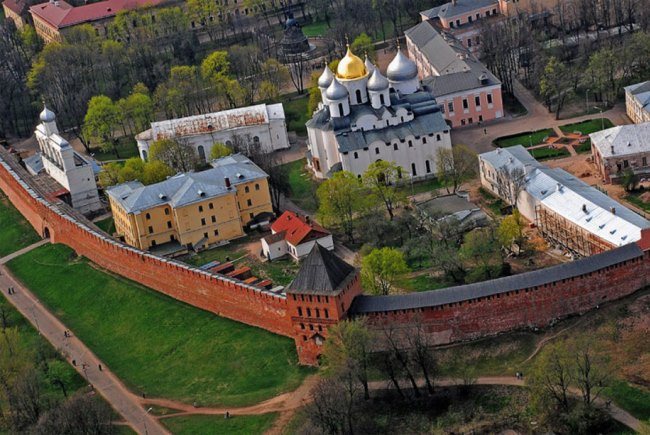 St. Sophia Cathedral was very important for Novgorod, it is evident even by the fact that, as a rule, at that time, such monasteries were built for centuries, and this cathedral was built only for some five years. What speaks about the special importance of the St. Sophia Cathedral for the city and its inhabitants. The laying of the monastery occurred in 1045, and construction was completed in 1050. The temple was built according to the decree and under the guidance of the son of Yaroslav the Wise Vladimir.

The fact that Sofia Novgorod was built during the time of Yaroslav the Wise, and even more so with the participation of his son, led to the fact that the erection of the Novgorod Temple was conducted under the obvious influence of St. Sophia. However, Novgorod craftsmen were able to bring to their temple, something of their own, peculiar only to them and the people living here.

Therefore, Sofia Novgorod is notable for its compactness, and even can be said to be slender, and its domes, placed quite side by side with each other — show a clear Novgorod style. But despite all the severity, modesty and laconism, Sofia Novgorod, was the guardian of the city treasury. And this gave birth to a number of legends connected with the treasures hidden and found in the walls and cellars. 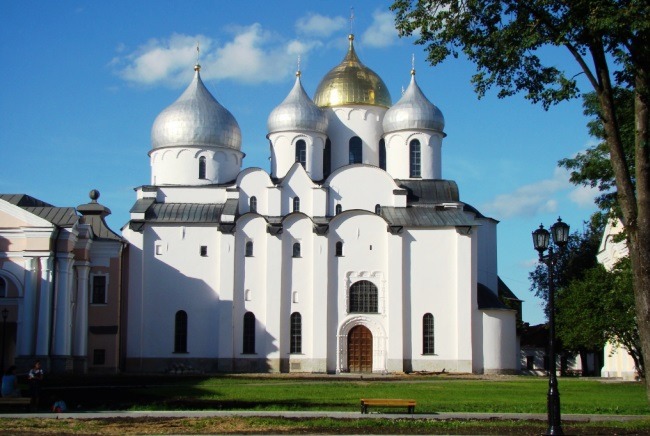 Very beautiful looks the facade on the west side of St. Sophia Cathedral. Once there was a main entrance, and the gates that closed at this entrance were bronze XII century. There is a legend that these gates have come to Novgorod as a trophy from the conquered Swedish capital Sigtuna. However, the image on the gate proves that they were made, were in Germany, in the city of Magdeburg.