An interesting place, the White Rock or as it is also called Ak-Kaya Rock, is located in the Crimea near the village of White Rock, since it was called until 1848, after which it was renamed. It is not only a vertical, but also a rocky wall, completely white, towering above the river Biyuk-Karasu. The rock rises above sea level by about 325 meters, and the difference between the valley of the river and the top of the rock is about 100 meters. 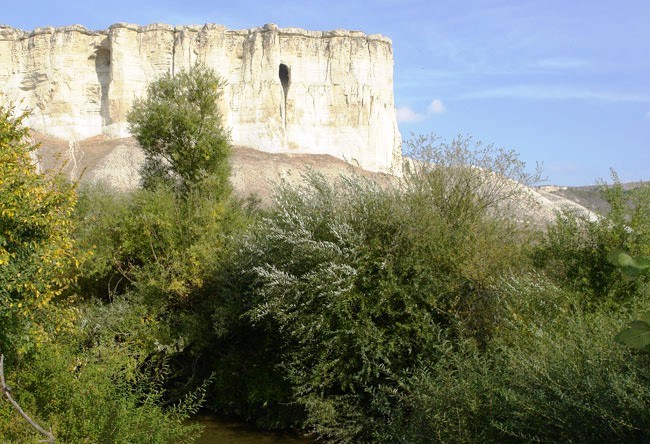 Mount Ak-Kaya, in translation from the Crimean Tatar language, into Russian means «White Rock». This rock appeared because of erosion and weathering. Weathering has turned the upper part of the rock into grottoes, oval niches and pillars. Fortunately, the complete destruction of the rock is partially stopped by a grabber and a dog rose. Since 1981, the rock has been recognized as a monument of republican significance, and until then it has been tearless lands abandoned and overgrown with grass.

In the 1960-1970s, serious excavations were carried out here, and about 20 stands of primitive people lived here in the Mousterian era. In that place were found many remains of extinct fauna, many tools of primitive labor, and ancient foci. And it was there that the first, the whole fragment of the skull of an adult Neanderthal man was found. This area of the mountain was chosen by the ancient people, being the most favorable for habitation. Convenient location of canopies and grottoes, river water and rich deposits of flint. 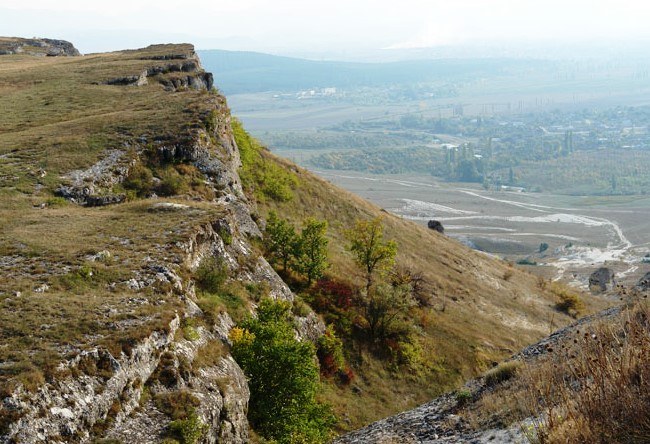 Places rich in game and convenient for enclosure hunting. Centuries later, already in our era, in the caves near the rock lived the Sarmatians. This became known by the found generic signs, tamgas, which were carved on the rocks for the assertion of the right to own this territory. On the plateau at the river found many Scythian mounds, and in the Middle Ages in these places lived the richest Tatar clan — Shirin. By tradition, the head of the clan was chosen to choose on the White Rock.

The rock was also used as a Crimean «veche», it was customary to hold a meeting of murz who were dissatisfied with the rule of the khan. At the top of the cliff there was Hetman Bohdan Khmelnitsky, unredeemed captives before his eyes were dumped from this rock. Later, in 1777, on the rock there was Suvorov’s headquarters, and in 1783 it was on this plateau that the Crimean nobility brought an oath to Russia. An unusual kind of rock attracts the attention of filmmakers, it was often filmed both in domestic and modern cinematography.