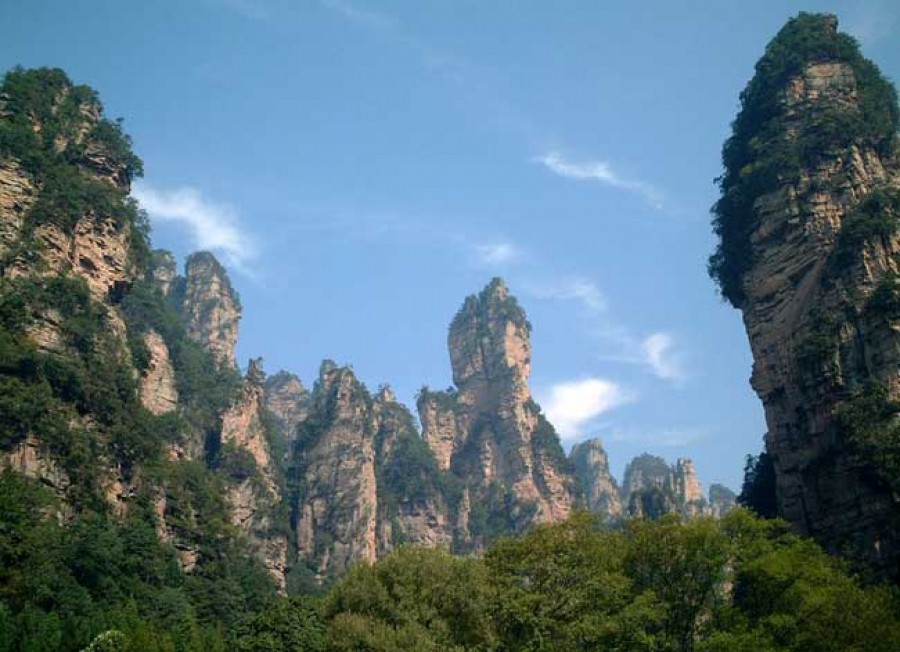 If you decide to visit China, then your trip will not be complete unless you visit the province of Hunan, Zhangjiajie National Park. You will enjoy when you see the most beautiful place in the country – the rock Ulinyuan. 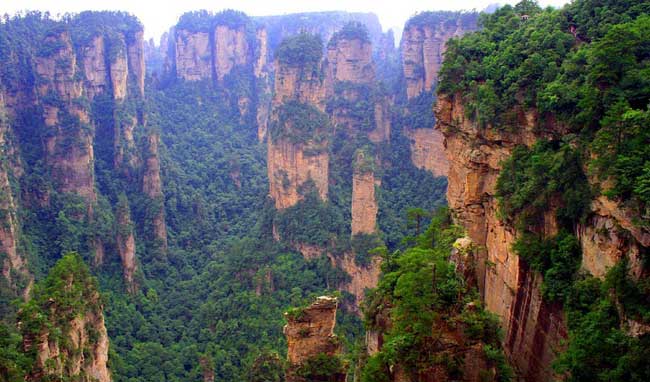 On Ulinyuan became known to travelers relatively recently – in the 70s of last century. Today it is one of the favorite places of photographers and artists, filmmakers and lovers of exotic travel. Tourists from the West, first discovered this amazing terrain, with rapid speed spread the information on the breathtaking cliffs around the world. In 1992, a catalog of world natural heritage came the name of the true miracle of nature – the cliffs Ulinyuan.
Unusual rocks Ulinyuan in Hunan 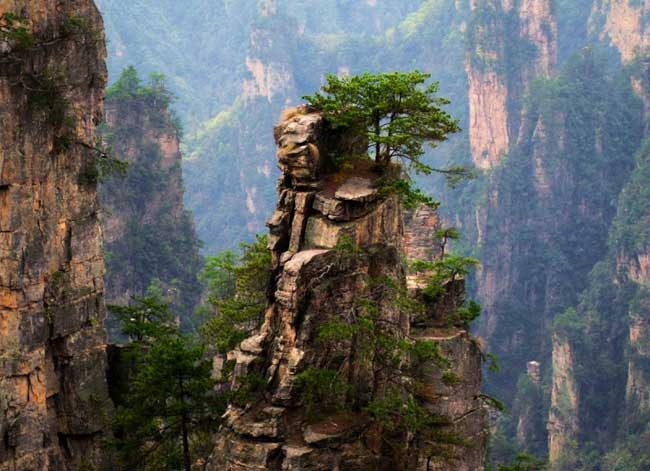 This picturesque place is located in the Chinese province of Hunan. Rocks prostrated at 260 square kilometers. The composition includes Ulinyuan Park Zhangjiajie and three reserve – Yantszyatsze, Sosiyuy and Tyantszyshan. The terrain is practically deserted. Local flora and fauna are strictly protected, so here you can see the most pure, pristine beauty of nature.
Only a few groups – Miao, Tujia and Bo, lived here for a long time, holding sacred own language and following the ancient traditions. That they should be grateful for the integrity of this magnificent, heavenly corner of the earth.
Peaks rocks Ulinyuan 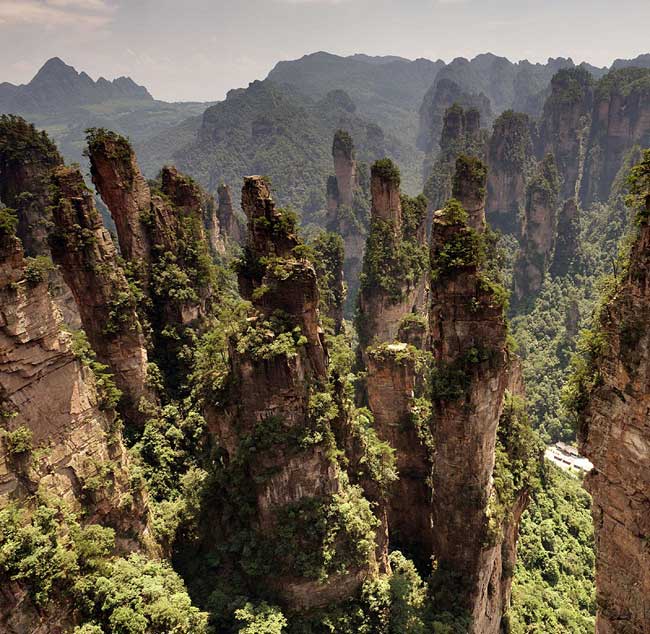 Wulingyuan – a work of nature. Under the influence of wind, water, sun, and, of course, the time, the rocks have acquired magical, just a fantastic look.
The most momentous here considered spiky peaks. At its core – a sandstone height from 200 to 800 m. Such colossal columns there are more than three thousand. Each rock is unique, has its own shape and even movement: some columns seek to pierce the heavens, the other as if ready to fall down.
Park Zhangjiajie 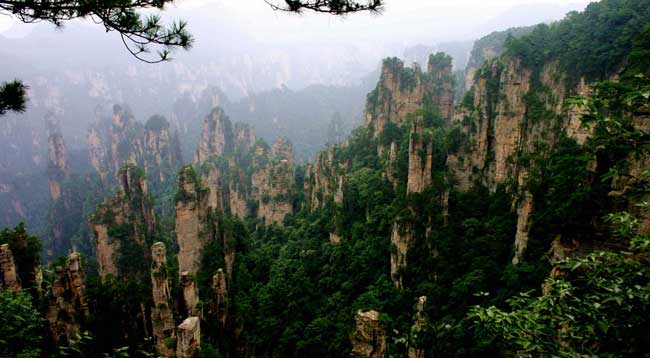 At the foot stretch of green valleys, noisy waterfalls, flowing blue ribbon rivers. Interesting and caves, which are within the park, there are about forty. Tourists do not cease to admire the natural stone bridge.
Wulingyuan as an idea for Avatar 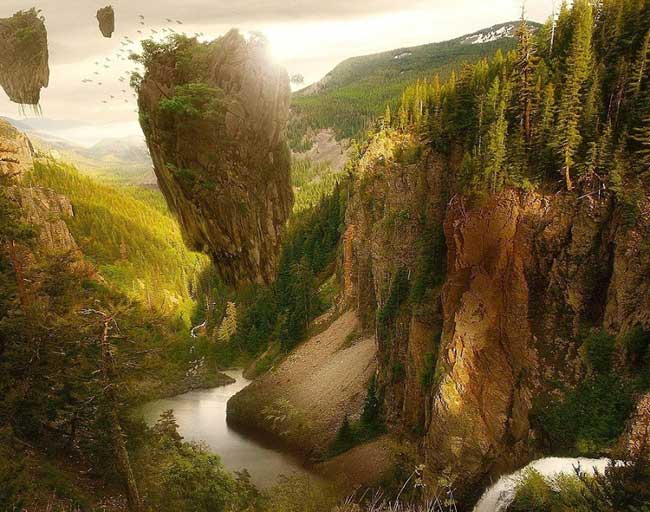 It is possible that the Zhangjiajie National Park as a basis for the idea of the film “Avatar”. At least, after the appearance of the box office hits rocks Wulingyuan steel invariably associated with the flying island of Pandora.
Transport in the park Zhangjiajie 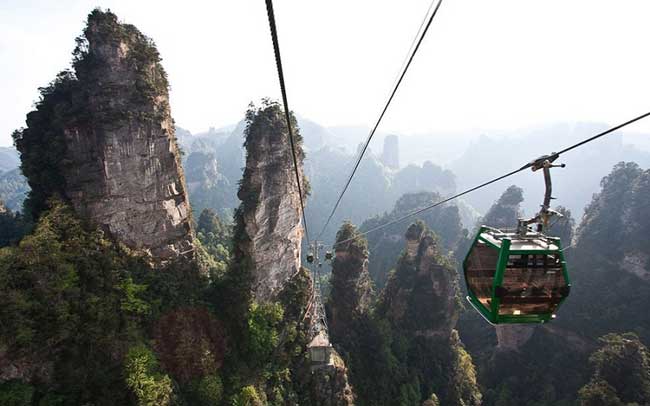 You can talk endlessly about this magical place, but no one word will not give all the beauty of the province Hunhan. Certainly better to see everything with my own eyes.